It’s noon at the office. You stand up after 30 minutes of shooting rubber bands at the ceiling. Your stomach rumbles violently.

“I haven’t eaten since 8 this morning. I’m starving!”

You shoot over to the break room for your keto donuts and run into a co worker you haven’t seen in awhile. But something is totally different. She looks… wow! What is it about her?

“Have you been exercising more?”

“Keto dieting? Want one of my keto donuts? They’re filled with this ultra low carb jelly!”

“No and no thanks! But you are infinitely kind!”

“Okay good, because I did for a few months and it didn’t do a thing!”

“Come on, tell me what you’re doing!”

“Something called the Fasting Mimicking Diet.”

“Fasting? You can’t do that! How do you work? You’ll starve. Your muscle will fall off.”

“Actually, my productivity has increased. Sue was just talking about giving me a promotion. And as far as I can tell, my muscles aren’t falling off and I am not starving. And my doc started lowering my diabetes meds!”

“Well, I wanna try! Summer is coming up and I need this belly fat gone! Tell me more about this diet!”

Maybe you’ve thought about fasting. But like our friend here, some misconceptions surrounding the idea have deterred you. The reality is that we are incredibly adapted to withstand long periods of time without food. Contrary, to the belief of most, you aren’t starving five, six, or even ten hours after your last meal. Nor are you starving even a few days after a meal.

Yes, you feel like crap. And it should be no surprise. Consider the fact that most folks in the western world eat several times a day, 365 days a year. An interesting study done recently by Panda and friends showed that the average person has anywhere from 4-10 eating episodes per day. They also showed that when feeding frequency was decreased by shortening one’s feeding window, sustainable weight loss was achieved.

Imagine learning something and then not making use of that knowledge for a while. Let’s say physics. Because everyone loves physics. Or not. You took a class, probably learned the material well enough to pass the course and then didn’t use it for the next five years. One day, your friend asks you for help in figuring out the solution to a physics problem on an assignment. You are absolutely capable because you’ve found the solution to the same types of problems before. You want to be helpful, so that night you reach for your incredibly dusty physics book, wipe that dust off and take time to relearn some physics.

The first few days are painful. The book is dry, you’re largely uninterested. You’re irritable, getting headaches, and mental fatigue is setting in. But the next few days things start clicking, you’re integrating concepts, and doing physics painlessly! So you’re ready to help your friend…

“Hey! I’m so ready to help you crush that physics problem!”

“Oh great… well, I uh… I already figured out. But thanks!”

And so you didn’t help your friend, but now you can do some physics… until you forget again.

The same thing happens with your body. The difference is we never had to learn how to fast. That knowledge was always there. But it takes time for the processes to support fasting to be ramped up. It’s like dusting off the physics book. After a few days of feeling lousy, things usually get better. And as with the physics, if you were to expose yourself regularly, reusing the material in the future wouldn’t be as painful.

This has been my experience with fasting. The transition is almost seamless. There are times when life will throw you a curve ball and it isn’t the right time to fast, but with consistency, it gets easier.

But I get it. You’re still averse to the idea. Fortunately, there may be a less painful way of getting the benefit of complete abstinence of food.

What is the FMD?

The fasting mimicking diet (FMD) is a dietary strategy that allows you to reap the benefits of fasting while being able to eat some food. In a nutshell, you are doing 5 consecutive days a month of caloric restriction. The remaining days you return to your typical eating patterns.

Why would I do the FMD?

Longo and friends recently published a study looking at two models of diabetes in rodents. What they found was that the FMD was able to improve blood sugars, insulin sensitivity, and possibly even cause regeneration of insulin producing cells in the pancreas. This has big implications for type one diabetics dependent on insulin to manage their health.

In one model, rodents were poisoned with an agent that destroys your insulin producing cells of the pancreas. The idea was to create a model that was similar to type one diabetes. The investigators found that the mice on the FMD had morning fasting blood glucose levels of 200 mg/dl 50 days after the poisoning. Whereas the mice eating ad-lib had blood sugars over 400 mg/dl. Additionally, the mice on the FMD had higher insulin levels and greater ability to clear glucose from the blood. The authors believed this to suggest that diet had a regenerative effect on insulin producing cells of the pancreas.

In the type two diabetes model, the investigators used mice with a leptin receptor defect that causes profound insulin resistance. These mice develop very high blood sugars by 10 weeks of age and usually die at around four months of age. As in the previous model, the rodents on the FMD had better glucose tolerance. And most interesting, the lifespan of the mice was extended. Almost half of the mice in the ad lib group were dead four months out. Whereas all of the mice in the FMD group were still alive.

What about you and me?

A study published in by Berandhorst and friends subjected men and women to FMD in a slightly different fashion. Instead of weekly FMD as in the mouse models, subjects did the diet 5 days a month for 3 months.

Investigators tracked fasting glucose, body weight, trunk fat, lean mass, and CRP (among other markers). The study was small, and there was only statistical significance in two parameters. But noteworthy was that the FMD group did not seem to lose lean mass, lost belly fat, and had a decrease in inflammatory marker CRP.

Restoration of beta cell function in the pancreas

In the rodent study, investigators used a more intensive FMD approach. This made sense given the severity of the rodents’ conditions. The plan was 4 days of reduced food intake followed by 3 days of “refeeding” which for you would translate to resuming your normal diet. This process was repeated weekly for several weeks at a time.

In the human study, investigators used a less intensive approach. Subjects were asked to enjoy 5 days of reduced food intake, and the remainder of the month return to a normal diet. This was repeated for three months.

From this you might gather that for more severe health conditions, you might consider a more intensive strategy. Whereas if you were just looking to lose a little weight and improve body composition, a less intensive approach would be more appropriate.

What are you eating during the “on” days?

The authors recommend doing a plant-based approach. And they even highlight a specific product you use during the five days. I don’t think either are necessary to derive benefit.

The value in purchasing the product highlighted is that you don’t have to think about what you’re going to eat. But it isn’t hard at all to take these numbers and use google to figure how much…

Beef, chicken, fish, beans, nut butter or whatever else keeps you in the protein ranges above.

Rice, sweet potato, yams, squash, beans keeps you in the carbohydrate ranges above.

Oil, butter, avocado, cream, nut butter keeps you in the fat ranges above.

Fibrous vegetables are able to be eaten liberally. Unless you are blending or juicing, they are unlikely to make meaningful contributions to macro nutrient intake. This includes broccoli, cauliflower, asparagus, brussel sprouts, onions, spinach, kale, arugula, leeks and cabbage.

For instance, if you google “nutrition potato” your search will display a box on the right of the browser that has the nutrition facts for a particular food. It has a drop down menu as well that shows you the nutrition per serving size. 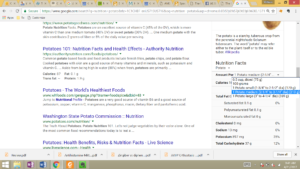 For fat, we can use an avocado as an example. A small avocado has around 23 grams of fat. So day one, I wouldn’t exceed more than 3 small avocados. And days 2-5 I wouldn’t want to have more than one and maybe half another.

Now it’s unlikely you’ll be fixing a plate of russet potato, cod and avocado. Because as delicious as that sounds to me, it might sound disgusting to you. If you’re buying packaged food, it likely has a nutrition label. If not, you can use google searching as described above to hit the numbers highlighted for day one and days 2-5. Don’t forget about oil if you’re cooking! A tablespoon has around 14 grams of fat!

You don’t need to be exact here, ball parking it will still give you a lot of benefit. Oh, and don’t forget the vegetables.

Caution! Fasting and caloric restriction isn’t for everyone.

Fasting is a stress on the body. In some contexts that stress is good. In others, not so much. Yes, most people are likely to tolerate something like this just fine. But it is important to stop and consider whether or not it is appropriate for you. And if you’re not sure seek help! Special attention should be given to those with

There’s many roads to Rome…

It’s important to recognize that the benefits of fasting occur on a spectrum. There are ideas floating around out there as to what the ideal mode of fasting is. The feeding window. The number of days fasted. What color shirt you should wear. The FMD is likely a more feasible strategy, particularly for those of you just wanting to get your feet wet.