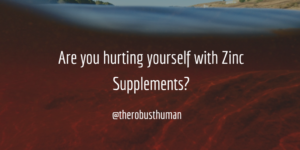 There’s nothing wrong with educating yourself and taking your health matters into your own hands. But you do need to be careful when pulling the many different levers without guidance.

I’ve been working with a patient on a student rotation I’m on at school whose chief concerns were recurrent bacteremia and vertebral infection. Over the last year she’s suffered three infections, with the most recent attacking her bones, liver and spine. She’s currently being treated with IV antibiotics for her vertebral infection.

Her back story is quite tragic. When she was younger she had severe headaches that resulted from hypertension. Her primary care provider at the time discovered protein spilling into in her urine and referred her to a kidney specialist. She was essentially told “it appears your kidneys are failing, and we have no idea why.”

She ended up with end stage renal disease and began dialysis in her twenties. A few years after beginning dialysis she was diagnosed with systemic lupus erythematosus.

Why was the diagnosis missed years prior? She didn’t fit the criteria for lupus because all she had going on was autoimmune assault on her kidneys, with the resultant proteinuria, hypertension and headaches… far removed from what the textbooks say.

I was recently told by a medical doctor who has worked in the acute setting for over 20 years:

“Billy, anything goes in medicine. I had an older gentleman come in who was experiencing a heart attack and presented with nothing but pain in his thumb and sweating.”

And so it’s important to remember things sometimes don’t present the way we’re taught in books or the classroom.

Had this patient’s kidney specialist been aware of this, he may have considered lupus nephritis and she may have avoided the dialysis sentence. And as naturopathic as I am, this is a case where anti-rheumatic medications were likely indicated, which could have saved her kidneys and potentially kept her off of dialysis.

Sorry for the rant, but this is a topic we’ll be revisiting in the future. It’s important to establish the correct diagnosis and proceed appropriately so that we can minimize complications that result in severe deterioration in quality of life.

So, zinc and her backstory are unrelated. But zinc is likely related to her most pressing current issue, these recurrent blood infections and the infection in her spine.

Dialysis is referred to as “minimally invasive”, but it’s invasive enough to subject patients to bacterial invasion. In fact, 30-60% of dialysis patients die from complications related to infection [1].

But anyway, why had she suddenly began suffering these blood infections over the last year, having no issues the 24 years prior? She has blood work done pretty regularly, and she notes a downward trend in her white blood cell count over the last year.

Age is obviously a factor. Depletion because of dialysis is another possibility. Deterioration in lifestyle parameters, although she reported actually doing better in that department, but I don’t think they explain this sudden drop in her white blood cells. Reactivation of her disease process is another consideration, because pancytopenia is a feature of lupus, which means her homeland security is going to have less troops.

And of course, a breach in her dialysis hygiene or practice. Her dialysis access was changed from a fistula in her arm to central access, which would tremendously increase her risk of infection. But this occurrence was recent and doesn’t explain the recurrent infections over the past year.

Interestingly, I learned during my intake that she had begun 50mg of daily zinc supplementation on her own accord, two years ago, because her own investigation made her believe it would be good for her. She is using many supplements, none of which are copper-containing.

But isn’t zinc good for your immune system? Absolutely. But chronic, high dose zinc supplementation can cause problems because it can hurt your copper status.

Harm to copper status happens because zinc is a critical component of your defense against environmental toxicants, particularly heavy metals.

Zinc supplementation upregulates the production of a protein called metallothionein, which is essentially a big ball wearing tons of sulfhydryl groups. Heavy metals get really intimate with these sulfhydryls. These sulfur components also have an eye for copper.

And so, the expression of these metallothioneins in the intestinal tract, causes copper to essentially get stuck in your enterocytes and never make it into your bloodstream, where it’s necessary for many functions, including the production of white blood cells.

From Modern Nutrition in Health and Disease…

“High dietary zinc intake impairs copper absorption. This may in part be explained by the induction of metallothionein (MT) in enterocytes. Moreover, copper depletion has been observed in humans consuming supplements containing 50 mg of zinc daily for extended periods; this finding is, in fact, the rationale for the tolerable upper intake (UL) for zinc of 40 mg/day for adults (42).” 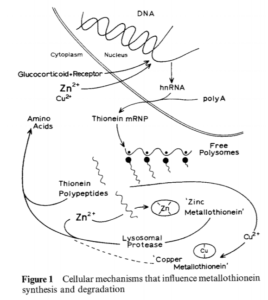 Well why does copper matter? Copper plays an important role in the normal functioning of the immune system. One of the hallmarks of copper deficiency is low white blood cells and more often low neutrophils. Neutrophils are important as first responders to bacterial infections, which the patient has an increased risk of because of dialysis.

From Modern Nutrition in Health and Disease:

“Evidence exists that copper plays an important role in the normal functioning of the immune system; many studies have show that systemic copper deficiency is frequently associated with an increased risk of infection (34). The reason may be that cellular and humoral factors of the immune system are altered or suppressed by copper deficiency. A commonly noted symptom of copper deficient humans is neutropenia, and some activities of macrophages and lymphocytes are adversely affected by even marginal copper deficiency. One study in men demonstrated that in vitro stimulation of T lymphocytes was suppressed by consuming a diet with 0.36mg copper/day for 42 days. These individuals further had decreased plasma copper levels and reduced activity of some copper dependent enzymes, but their hematologic parameters were normal (35).”

So you may not need major changes in your copper status before your immune system is hit.

What’s also interesting about this patient is she’s noted a recent change in her iron status. In the past she stated that she had always trended towards iron overload, but her last few assessments have revealed depleted iron stores. Poor copper status impairs absorption of iron and its transport around the body for utilization. And so, her change in iron status is potentially explained by her zinc supplementation.

In the image below, you are looking at an intestinal cell with two proteins required for the uptake and release of iron liberated from food, boxed in red. 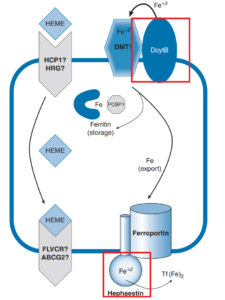 In addition to negatively impacting red blood cell production, iron deficiency can impact the capacity of your homeland security in fighting infection. This has been shown in recurrent gastroenteritis, bronchitis and otitis media in children. Correcting poor iron status decreases the frequency of infections [2].

Oftentimes, white blood cell counts are unaffected, but they certainly can be. A case study of a 67-year old woman with chronically low white blood cells, diagnosed with “chronic idiopathic neutropenia” suggests this to be the case.

“An astonishing outcome was that in addition to having her iron deficiency anemia treated, her long-term unexplained neutropenia was also corrected [3].”

I think it’s also worth noting that across her (the patient in the case study) 80 separate blood counts, her hemoglobin was often found to be within the normal range. Yet her ferritin was consistently <15ng/mL. And her white blood cells were consistently under 3000 cells/uL.

The implication here is that the iron deficiency doesn’t need to be very severe, before white blood cell parameters are impacted. Worth noting, because sometimes clinicians can be very conservative in their iron approach.

So, after the initial intake, the potential explanations for this patient’s recurrent bacteremia are:

1. Breach in dialysis hygiene and practice.

4. Active flare of her autoimmune disease.

I’m suspicious of 2, 3, 4 at this point. So we expect a compounded impact on the immune system because of poor copper status and because a common feature of lupus is pancytopenia, which means low blood cells, including white cells.

Her serum copper came back today, but her spectracell panel did not.

The copper level was 50ug/dL, which makes our suspicion of poor copper status more likely. The laboratory reference range is 72-166ug/dL.

A few studies I looked at show copper status in healthy menopausal and post menopausal women to be 109ug/dL – 160ug/dL [6, 7, 8]. This particular patient’s metric was half the bottom end of this range.

Another thing to consider is that she has a chronic inflammatory disease and an active infection, which would be expected to increase her serum copper.

“A common hallmark of infection irrespective of the agent (viral, bacterial, fungal) is a marked and progressive rise in serum copper [9].”

Displayed below is a graphic of copper dynamics in the context of inflammation from the article “The Yin and Yang of copper during infection.” Sweet title. 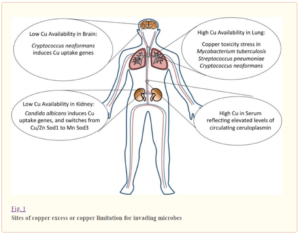 Ceruloplasmin is a component of the acute phase response, presumably to bind up copper in the bloodstream and prevent pathogens from taking advantage of it. The increase in serum copper is reflected by this increase in ceruloplasmin.

The point is, the patient’s serum copper is not fully reflective of what her copper status actually is, because it isn’t a totally specific marker. And her serum copper would likely be even lower than what we measured.

Why is this important for you?

Could it be that her recurrent bacteremia and that infection in her neck are a result of her self-prescription of supplements? Yes.

Now, the consequences of inappropriate zinc supplementation are unlikely to be as severe for most of you out there.

And I said before, there is nothing wrong with educating yourself and being the captain of your own ship. You should educate yourself. No one is going to care about your health as much as you will.

But when it comes to making decisions, it’s best to include someone who can team up with you and guide you through that decision making.

Should you decide to go about supplementation on your own, you should be cautious with your zinc supplementation. If you’ve been supplementing with zinc for long periods of time without copper on board, consider getting someone on your team who can help you determine if any harm is being done.

Infections as a leading cause of death in dialysis patients

The role of iron in host defense

The impact of infection and inflammatory signaling on copper status 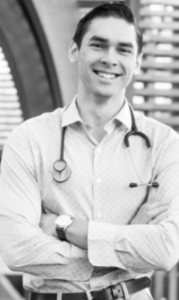 Billy Mitchell is a medical student wrapping up his 4th year at Southwest College of Naturopathic Medicine. His areas of interest include rheumatology, gastroenterology and environmental medicine.