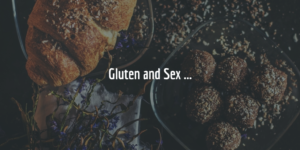 Yeah, I know… a bit anticlimactic. Although, I certainly could see how some well placed gluten could lead to some good sex!

But what does gluten have to do with your sex hormones?

I was recently introduced to the concept of opioid like products derived from gluten contributing to hyperprolactinemia. There’s some interesting studies that have been done supporting this idea.

The idea is that you consume gluten rich, wheat product > opioid-like molecules are formed from gluten in the intestinal tract called exorphins > exorphins are taken up by the gut > exorphins bind opioid receptors > prolactin release is stimulated.

Most of the studies are in rats showing that a specific product of gluten digestion called gluten exorphin B5 stimulates prolactin release.

What about in humans?

Kapur and friends split kids with celiac disease into two groups… one group eating a gluten free diet, the other eating a gluten containing diet. In the group consuming gluten, EVERY SINGLE PARTICIPANT had hyperprolactinemia (1). Gluten exorphin B5 has also been isolated from blood of celiac disease patients (2).

Prolactin is a hormone secreted by your pituitary gland. It’s essentially a way for your brain to shout several different commands at the various players in your body, regulating different processes. Along with sexual dysfunction it’s been associated with thyroid disorders, pain syndromes, nutritional deficiencies, and even cancer, which I’ll cover for you at a later date.

Prolactin is best known for allowing mom to produce milk for baby. In order to fully support this process, prolactin inhibits the release of two other hormones called LH and FSH. These hormones cause the production of our sex steroids… androgens and estrogens. By inhibiting LH and FSH, we put the brakes on the menstrual cycle, so mom can put energy into producing food for baby.

That’s all good stuff. The problem is when mom is not needing to breast feed. High prolactin will still inhibit LH and FSH and cause a deficiency in sex steroids, which in this context, are required for robust health.

A question that remains is whether what’s mentioned above happens in folks without autoimmune disease. Prolactin has an immunoregulatory role as well. So could hyperprolactinemia just be a product of autoimmune processes?

Why should you care about all of this?

If other causes of of abnormally elevated prolactin level have been ruled out (tumors, hypothyroidism, dopamine deficiency, etc), it may be considering gluten as a factor.