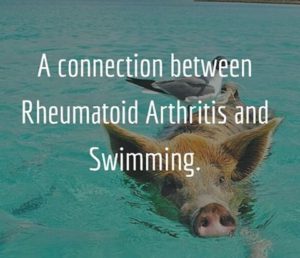 While I was digging around looking for other options in treating rheumatoid arthritis (RA) for one of the cases I witnessed this week in clinc, I came across the work of Roger Wyburn MD.

Some clinicians have found that treatment with anti-protozoal agents like metronidazole have resulted in complete resolution of non-erosive changes in the joints of RA patients.

For instance Alan Gaby MD has treated over 30 patients with RA or other rheumatic conditions, where nutritional interventions had failed. Of these 30, 15 experienced dramatic and long lasting improvement.

What does this have to do with swimming? Naegleria is a waterborne pathogen. Folks pick up Naegleria when they’re out swimming in lakes, ponds or rivers. Some even argue tap water as a potential vector!

Before anyone with RA jumps off their meds and starts looking for the fastest way to get treated with metronidazole, understand that there are many potential causes of RA, some infectious, some not. Additionally, randomized controlled trials (the two I managed to find) have found treatment with metronidazole to be disappointing.

This doesn’t mean metronidazole is necessarily ineffective for RA. It could just be that it wasn’t addressing the cause of those particular cases of RA.

Conventional treatments for RA (referred to as DMARDS) get a bad rap, but they are effective in slowing erosive changes in the joint that are very likely permanent. So while you may be really motivated to get all Sherlock Holmes on your case, you also want to protect your joints during the investigative process. Particularly in those cases where the degenerative process is unable to be arrested and continues to progress rapidly.