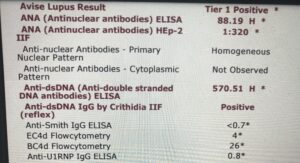 What you’re looking at here are autoantibody results, diagnosis – lupus and Hashimoto’s Thyroiditis.

Her symptom cluster? A smoldering process cruising along for decades, with interspersed crashes along the way.
Vague… flu like symptoms, odd skin sensations, episodic chest pain, widespread pain. Geez… it could be anything! Her physical exam is unrevealing, her other laboratory findings, normal with the exception of the occasional low sedimentation rate for inflammation.
She is easy to dismiss to deaf ears. Thin, bright, more athletic than myself. The patient looks healthy.
Shutting the door prematurely…
In some cases, I can smell autoimmunity from a mile away by virtue of the story with laboratory testing and imaging being of little help. And so I have learned to lean more on what the woman is telling me and the painful process of thought.
Unfortunately, it is the case that some providers would practice so conservatively, so unimpressed by her presentation, labs would not be ordered.
I cannot tell you how many times a woman has stated something to the effect of “the specialist said to take ibuprofen, return to your primary care, there is nothing wrong.
In this particular case, strong argument can be made for little objective findings and low pretest probability. Pretest probability essentially means we already know a duck has walked into the office and the lab testing will confirm that.
Opening too many doors…
On the other hand, you have overly liberal providers out there, who have never heard of pretest probability or positive predictive values. Maybe it was an afterthought in their educational programming.
These folks are often your naturopaths and functional medicine doctors, who don’t hesitate to order thousands of dollars of lab testing, i.e. lyme, mold, exotic hormone, metabolic markers, exotic antibodies. Psst… ask these alternative doctors how much revenue they generate marking up these lab tests.
On the liberal end, when an abnormal lab value is identified the concepts of positive predictive values and specificity are left aside, in other words, “does this positive value (ANA, CRP, leptin, etc.) make any sense? Do I need to change my thinking on the basis of this test? Should I have ordered the lab test in the first place?”
If you want to read about how it’s further complicated… read about the concepts of “p-hacking” in scientific method and regression to the mean.
Worst case, these providers run patients down neon brick roads that lead to nowhere, poorly explaining positive values and the meaning to whom they ordered them for.
Indiscriminate ordering of lab testing spits on the oath of first do no harm. Aside from the economic implications, I’ve encountered individuals lost in a mire of anxiety and depression by virtue of misunderstanding lab results.
The ticket is a good history
One of my most cherished mentors taught me the ticket is a solid history.
As a health care consumer on either end of provision of care – more liberal or conservative the bottom line is simply this – if little effective time and care was provided, the absence or presence of positive lab markers is of little value.