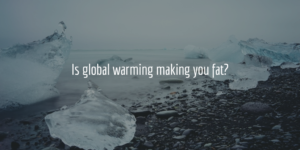 When was the last time you were cold? I mean like… teeth chattering, shivering, rubbing your arms, external auditory canals burning, sphincters slammed shut?

Yeah, probably not in a while.

As unpleasant as all that sounds it might be good for you.

How humans deal with cold stress

We defend against the negative extreme in temperature through processes referred to as thermogenesis. We have shivering and nonshivering thermogenesis.

Shivering relies on muscular contraction. Last year I took a trip to a lake with some friends in the late Spring. We were all excited about jumping into the lake until we were out on the water on my friend’s boat. Our faces were numb. It was obvious people were backing out. “Lame… I am so doing this!” Within 5 minutes I was stripped down and in the water. The aftermath was comical. I was trembling so violently, you might have mistaken what was going on for a seizure disorder.

The less comical way we deal with cold stress is more complex. It relies on our sympathetic nervous system, our endocrine and immune system. But we’re going to briefly zero in on one component of it. Our body fat!

We have white adipose tissue (WAT) that largely functions as cash under the mattress. We also have brown (BAT) and “brown in white” (BRITE), that help us use some of that cash!

It was previously thought that significant amounts of BAT were only found in infants. However, recent studies have found otherwise. It seems that in adults, most of the darker fat exists just above your collar bones, between your shoulder blades, and around your upper spinal column. I say darker, because it is not as clear whether that fat is BRITE or BAT.

BRITE and BAT are different in that they are much more mitochondria dense than WAT. The iron in mitonchdrial proteins explain their darker appearance. Recall that the mitochondria is the power generating components in our cells. There is a big difference, however, in the mitochondria of BAT and BRITE. That is, they express a protein called UCP1. This protein explains the heat producing capacity of these fat cells.

When you get chilly, circulating stress hormones increase. This causes BRITE in certain areas of your body to become darker. Additionally, your BAT grows and becomes more active. These darker fat cells will soak up glucose and fatty acids, burning them and generating heat!

You can sort of think of them as an energy sink. BAT and BRITE are part of an intricate system that regulates your body weight. We’ve all sat down and trucked through massive amounts of food in a single sitting. You may recall feeling very warm afterwards or even sweating. That is because much of the energy burden from over consumption of food is being placed on your BAT and BRITE. This is partly how your body defends a happy weight. Less of this specialized fat means you are more susceptible to the effects of overeating on your body weight.

I’m revisiting this topic for you because a recent publication in the British Medical Journal  looked at temperature as an input in diabetes. Although small, investigators found an increased prevalence of glucose intolerance with greater outdoor temperature.

The idea is that warmer environments suppress BAT activity, and this contributes to obesity and diabetes.

It is an interesting idea. The findings of these authors and others suggest that one of many points of attacking obesity, diabetes and heart disease is our degree of exposure to cold stress.

Others have been exploring means of exploiting the response to cold stress in combating diabetes and obesity. Although, there is very little clinical data on this topic, I wouldn’t yet discount the benefit of consistent cold stress. In fact, I engage in several behaviors myself because I believe the magnitude of these behaviors can be pretty substantial. Especially when engaged in consistently and with other means of inducing thermogenesis in BAT.

In the next post, we’ll take a look at some different strategies for this.