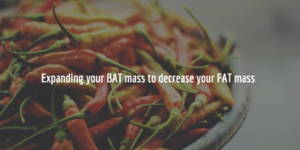 In the last post we gave you a sense of what brown fat cells are and the potential of exploiting nonshivering thermogenesis for a lean and healthy body.

Recall that brown fat consists of brown adipose tissue and beige adipose tissue, which we will collectively refer to as BAT. Your BAT mass is an important component in defending your ideal body weight. Brown fat can act as an energy sink when faced with overprovision of food and in times of stress.

Now we’ll look at some strategies in maintaining a robust BAT thermogenic response. 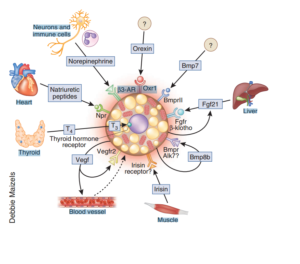 This is an image I snagged from a review [1] published in Nature on most of the known factors recruiting darker fat cells. As you can see, there are many moving parts! But we are only going to zero in on a few. The few that we are able to safely manipulate the most.

You don’t live in the real world…

Once upon a time we regularly were exposed to cold. But no longer for many of us. If I’m not cozy because of the temperature, modifications can be made to myself or my immediate environment.

It’s not about global warming. Rather, the nature of the modern world. Thank you electricity, insulated buildings, beds, clothing, and covers. Is the idea that loss of BAT mass being a contributor to disease because of our modern capabilities such a far out idea?

Recall that nonshivering thermogenesis through recruitment and activation of BAT is one of the means in which we defend ourselves in cold environments. In response to cold, your nervous system causes the release of cortisol and catecholamines, which cause the recruitment of brown fat cells. These signals also cause your white fat cells to release their stored contents. The brown fat cells will use up their local energy stores and soak up fatty acids coming from your storage in order to generate heat.

Brown fat as an energy sink

This response to cold stress and other stimuli makes BAT an energy sink. The effectiveness of the energy sink likely depends on the individual’s total BAT mass. A case study published in a major endocrinology journal in 2014 provides an extreme example. A 68 year old woman was diagnosed with a benign neoplasm of brown fat tissue, also referred to as a “hibernoma.” The diagnoses followed 6 months of unexplained weight loss. Within a year of removal of the neoplasm, this woman gained over 30 pounds. 40% of that weight gain was abdominal fat [2]!

A core component in the etiological cluster of modern diseases is excess energy intake. It is likely you can derive benefit from expansion of your BAT mass. How do you expand your BAT mass? Strategic exposure to cold is one means. But how much benefit can we expect? And what is the degree and duration of cold stress that we need to subject ourselves to for that benefit?

In a study funded by the Canadian Diabetes Association, six males were subjected to two bouts of cold stress using a water-perfused suit set to 64F (F= degrees Fahrenheit, sorry Celsius folks). The duration was between two and three hours. Researchers recorded a two fold increase in energy expenditure during the time in which the appropriate cold zone was reached. This translated to an extra 250 calories average spent over a 24 hour period [3].

Investigators in the Netherlands subjected 24 males to a single bout of cold stress. Subjects were instructed to lie supine in a climate chamber for three hours. One hour was at thermoneutral conditions defined as 71F. In the other two hours, the climate was set to 61F. The energy loss from cold stress was reported to be between 280-340 calories across subjects [4].

Vijgen and friends stuck 15 morbidly obese subjects in cooling tents and had them lie supine in chairs with a cooling mattress to target their back. Tent temperatures were individualized to avoid shivering, with the lowest temperature reaching 53F and the lowest cooling mattress reaching 40F. Subjects remained in the tent for 2 hours. Change in energy expenditure amounted to a change of an extra 45 calories spent over a 24 hour period [5].  Ouch. 45 calories for that time investment! A less robust BAT response to cold in overweight individuals is a consistent observation across studies.

Note that these are all single bouts of cold stress. What happens when one is subjected to continuous cold exposure overtime?

Canadian researchers subjected six males to four weeks of cold stress using a 5 day on, 2 day off strategy. On cold days, subjects wore a water-perfused suit set to ~50F for two hours. At the end of the study, the authors reported an average increase in BAT volume of 45%. You can see the change in one of the subjects in the image below. The bright spots the arrows are pointing to and that are encircled are BAT taking up glucose [6]. 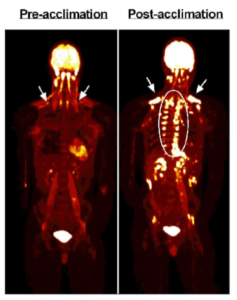 The investigators recorded decreases in baseline fasting insulin, leptin, cortisol, TSH and triglycerides. Glucose uptake and oxidative capacity of BAT increased, but interestingly energy expenditure in response to cold stress did not.

In another study, 17 individuals were stuck in a cold room 6 hours daily for 8 days. The temperature was set to ~60F. As in the previous study mentioned, the authors noticed increase in BAT volume ~37% across subjects. Also consistent with the previous study, decreases in baseline fasting insulin, triglycerides, and TSH were observed. HOMA-IR, a marker we use to determine the degree at which you trend towards diabetes, was also decreased. Average energy expenditure in response to cold stress increased ~7% [7].

In a more recent study, Lee and friends studied five men over a four month period controlling their bedtime ambient temperature. This study was really neat because they used each month to condition the subjects BAT with different temperature inputs. The first month was 75F, the second month was 66F and the third was back to 75F. In the fourth month, the temperature was 80F. You can see the changes in one subjects BAT mass below (red). 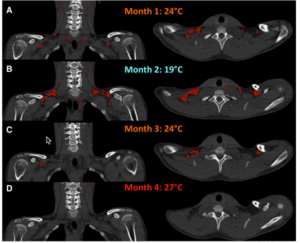 As expected, the recruitment and activation of BAT was most pronounced in the cold month. This corresponded with the greatest energy expenditure in response to cold stress during the month ambient temperature was set to 66F. So it appears you can adapt your BAT to use more energy. And not just in response to cold stress. Dietary thermogenesis increased as well. Which means a greater portion of your calories is partitioned into BAT. Rewarming decreased BAT volume and both thermogenic responses [8].

What we can take away from this is that BAT mass is plastic. Meaning it can grow or shrink partly dependent on ambient temperature. This seems to be the case in those who appear to have less BAT mass to begin with. In other words, the degree to which your BAT can act as an energy sink can be increased!

Cranking up the heat with Capsinoids

Consumption of spicy food has been shown to increase energy expenditure and augment the effects of cold exposure. In the image below, you can see certain constituents of these foods activate BAT in a similar manner to cold exposure [9]. 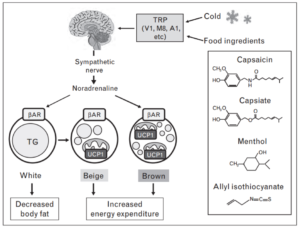 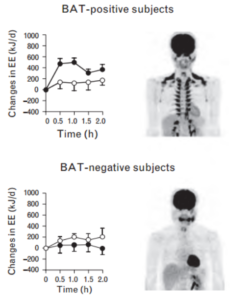 The inconsistencies likely have to do with individual variations in BAT mass. Lean individuals tend to be responders to capinsoids and cold stress, whereas overweight folks tend to be non-responders. Do remember that all individuals likely have some capacity for expansion of BAT mass. We might expect even better results in those regularly exposed to cold. That being said, it is clear there is a lot of potential for consumption of spicy food and capsinoids.

Hypothyroidism alters the BAT response to cold stress in rodents. What’s interesting is BAT seems to be recruited, since the animal becomes cold much more easily, but the thermogenic response is blunted [11].

Thyroid hormone is needed for the expression of the machinery that makes the mitochondria of BAT act as an energy sink. The implication here is that the health of your thyroid is likely critical to the optimal response to cold stress and capsinoids.

Addressing hypothyroidism is beyond the scope of this post, but some quick mentions would be ensuring you have appropriate testing done, identifying an autoimmune component, as well as addressing toxicant burden and micronutrient deficiencies. Thyroid replacement is often necessary.

Putting it all together

Some investigators think a small change in energy balance, around 50 calories per day, is sufficient in arresting the obesity epidemic [12].

Is this achievable with consistent exploitation of capsinoids and cold exposure? If you ask me, the effort cost of what we discussed above makes the use of these strategies a no-brainer.

How do I effectively expose myself to cold?

“Hey Billy, I don’t have a cold-perfused suit, cold tent, or fancy mattress.”

“Nor do I care for setting aside two or three hours for the mere potential of having a few hundred calories burned.”

Easy. No fancy gear needed. Recall that in Lee’s study, the modification of the bedtime environment was sufficient in causing changes in BAT mass. Temperature was set to 64F. This is totally doable. You could also make modifications to the ambient temperature in your work environment. This is easier to do if you have your own office at home you spend lots of time in. I suppose you could share Lee’s study with your employer!

You might seek out some place where you can get your work done that has colder climate. I take advantage of this coffee shop near school, where the owners insist on maintaing the temperature of the quiet work area at a frigid 68F.

The use of short, more intense bouts of cold exposure might also be useful. Cold showers and ice packs are other strategies to consider. It may be more effective to the areas of your body above the collarbones and between your shoulder blades.

Cold exposure is a stress on the body. Duration and intensity of cold exposure should be introduced gradually, particularly the more intense bouts.

Never apply ice packs directly to the skin. This can result in burns.

If you are trying to adjust to sleeping in a colder environment, be mindful of the impact on sleep quality. Hurting your sleep quality is likely not worth these efforts.

How do I effectively consume spicy food?

The study I mentioned above that caused a 119 calorie change in energy expenditure had participants using 135 milligrams of capsinoid per day.

If you’re really tolerant, you could get a sense of some other peppers you could play around with here. Scroll down to the section “Measuring Heat.”

You could also simply purchase capsinoid containing supplements from a health food store. No ties, but the brand Solaray makes a few good cayenne pepper products that don’t irritate the stomach.

To be clear, my position is that the major contributor to obesity and diabetes is poor nutrition. While I think there is a lot of potential here, nutrition carries heavier weight. These strategies are meant to augment the results of behavioral change centered around establishing a nutrient dense diet. The benefits of which extend beyond the ideal body composition.