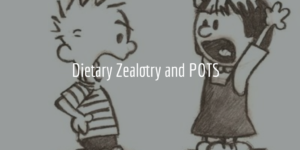 What is dietary zealotry?

Zealotry is when someone takes a belief too far. So far that they refuse to tolerate other perspectives. Insert the word “dietary” in front of it, and you can likely figure out the rest. I would expand our explanation here to include when adherents think their dietary approach has the potential to do zero harm.

There is a ton of information out there telling you to eat this and not that. I’ve gathered that people are more confused than ever before on how exactly they should eat to restore and maintain their health.

This advice comes from incredibly intelligent folks out there with good intentions who believe their way is THE way. Many of them have good reason to think so. I was actually the same way, initially. And it makes perfect sense.

Imagine your health was such that you were seeing the world only in black and white with really crappy resolution. Maybe a little static, too. I actually sat in the room with a patient who was diagnosed with “visual snow.” TV static clouding your visual field is actually a real phenomena! But that’s a story for another time. That really would be awful, wouldn’t it?

So, one day you decide you’re sick and tired of being sick and tired. You’re wandering through the bookstore one Saturday afternoon and you stumble into the diet and health section. For whatever reason, one of the books on the shelf is in vibrant color! And it seems like a beam of light is shining down on it. It almost seems to levitate off the shelf and into your hands!

You purchase the book and devour it in a few days. You apply the principles, which are more than likely also telling you to stop eating processed crap, go to bed on time, and get your ass off the couch. Soon after, you begin seeing the world colorful and in high definition.

So yes. As soon as the strategy I applied resulted in dramatic improvement in my health. I set out to learn all the little minutia behind how it worked and to share it with the world. I would talk about it to anyone who would listen and tell them why what they were doing was wrong.

But then one day I started working with people. I applied these principles. And guess what? They worked in some. And they failed miserably in others. In the beginning, I wouldn’t recognize these failures as my own. “So and so just wasn’t doing the diet right.” Sometimes they were not, but oftentimes they were. But what about the science? What about the mechanisms? This is supposed to work this way!

It’s funny how things actually work out in real life. There are many ideas out there that seem reasonably plausible, but a lot of the stuff published just doesn’t pan out. There’s nothing wrong with having an idea, but some of these ideas get too much stock put into them, and worst case lead people down the wrong path in a way that deteriorates their health.

Nutrition should be context specific. We’ve talked about this in the past. But I felt the need to bring it up again. Earlier this week I had a discussion with a friend of mine. In our conversation I learned a few things about his health and some of the dietary strategies he had seemed to be pressured into trying by folks around him.

The diet he had been trying out was a ketogenic diet. Those that recommended this dietary strategy to him failed to recognize that some folks with inflammatory bowel disease have involvement of their ileum. That means the end of their small intestine doesn’t work as well because it is chronically inflamed. In his case actually, the damage to his ileum was so severe that it is was removed.

Why is this relevant? That part of your small intestine reabsorbs bile acids. You secrete bile to help you digest fats. A ketogenic diet is a high fat diet. No ileum means a dietary strategy that is causing more bile release is going to cause problems. And so what ended up happening was he was having diarrhea unrelated to flares of his autoimmune disease. There’s problems beyond inconvenience and hurting your wallet in extra toilet paper cost, which we won’t get into here.

To add insult to injury, he’s also been dealing with a condition called postural orthostatic tachycardia syndrome or POTS. Folks with POTS experience a markedly increased heart rate and drop in blood pressure under certain conditions. These spells are most likely to be experienced when going from a seated or lying position to standing. The most severe consequence would be blacking out, which could be dangerous depending on where you are and what you’re doing when it happens.

POTS is an idiopathic syndrome. That means medicine has no idea what the hell causes it. Interestingly, it is associated with various autoimmune diseases, including Crohn’s disease. It’s also been associated with certain viral infections and environmental toxicants. It’s thought that the issue stems primarily from a disturbance in how your autopilot nervous system communicates with the blood vessels in your lower extremity.

Folks with POTS tend to also have poor renin-angiotensin-aldosterone signaling. These hormones help regulate your salt and water balance. This disruption leads to a decrease in plasma volume.

This is relevant to the dietary pattern my friend was recommended. He was told “well you’re suppose to have more salt when cutting carbs, anyway.” Yikes! Ketogenic diets cause the body to lose salt and water. Lots of it, too. I’ve discussed why this is here. This can be useful in certain contexts, but definitely not this one. Decreasing your blood pressure in this manner is only of benefit if you don’t risk killing yourself by blacking out and smashing your head into something. It’s no wonder his orthostatic events were more severe. Given what we know about POTS, we shouldn’t make the assumption that someone with POTS will respond to increasing salt intake as would someone without POTS using ketogenic diets. This is the second case of POTS I’ve interacted with in which orthostatic events were worsened by carbohydrate restriction. And for what it’s worth, the young woman I interacted with in the first case did not respond well to her ketogenic diet despite substantially increasing her salt intake.

I don’t mean to be throwing ketogenic dietary strategies or anyone in particular under the bus. I could pick out a handful of dietary strategies that would harm folks with POTS. I use a carbohydrate restricted approach in my own context. And I’ve seen it do some amazing things both inside and out of the clinical setting. I would imagine that it is helpful in many cases of Crohn’s disease. But we have to consider each case and individual case. Otherwise, we risk doing more harm. And first doing no harm takes precedence. Fortunately, harm was minimal in this case!

I get it, though. When someone has been suffering for such a long time, we’re really motivated to try out anything. And that is awesome. It makes me really happy to see people taking their health into their own hands and working hard to make a difference. But please, consider your context carefully. Don’t rest on the ramblings of others and what any particular dietary strategy did for them. You are not them. Nor the others who may have had success with it. And remember to include your doc when making drastic changes, especially when something more complex is going on!